waat do you sink abaut digital?

Tamar invited me to race with RFH, iI thought ok cool, something new to race,
and all I must do is RACE!.
I bought my self a Gr C BRM body, similar to the one that Tamar was to build for the
race, It was intended to be a "Test" car, and a car to test the Chassis that was to be
built for the car being made by Tamar.

Tamars car never saw the track because it was never finished due to the fact that he broke
his shoulder and could not complete the build....

Started my build as I always do, and one thing lead to another, and as always happens, too much
detail research and I exaggerated and took on more modifications that initially planned. 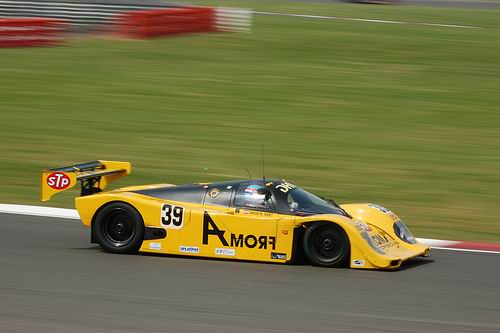 Made a short tail out of the long Tail, Painted the roof black as it raced in..XXXX.. ,
Rebuilt the side panels, made a scale interior, addedlots of P.E parts, made a diffuser ,
Rubber spoiler holders, 0,3mm plastic Spoiler... the whole nine ;-) 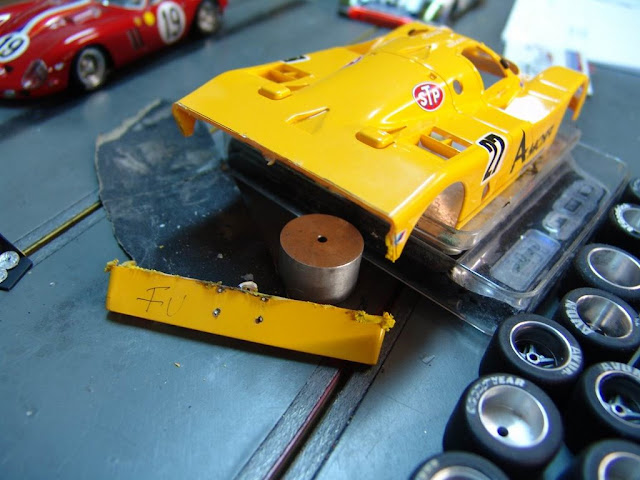 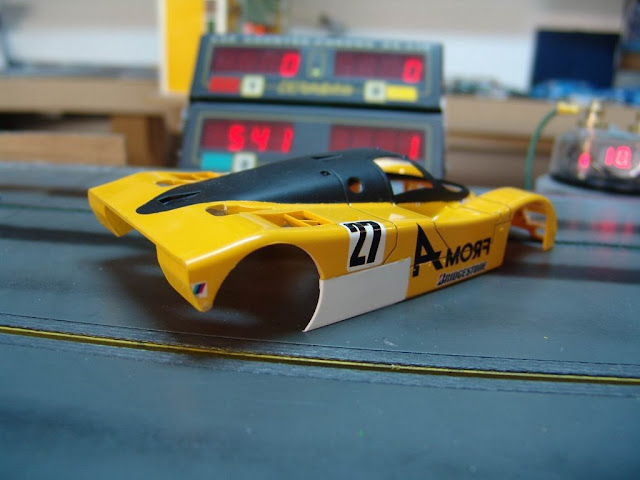 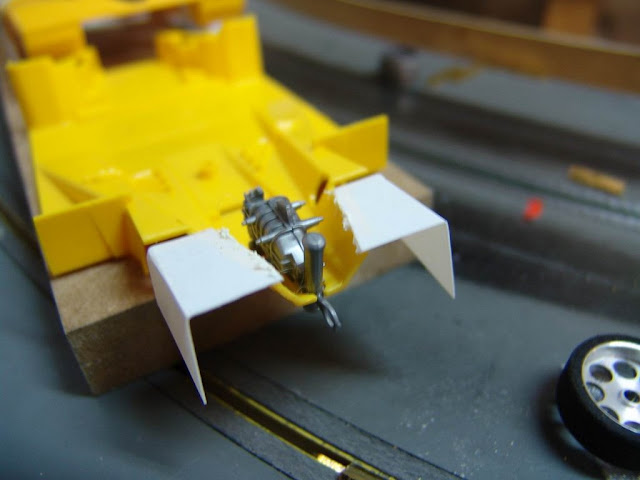 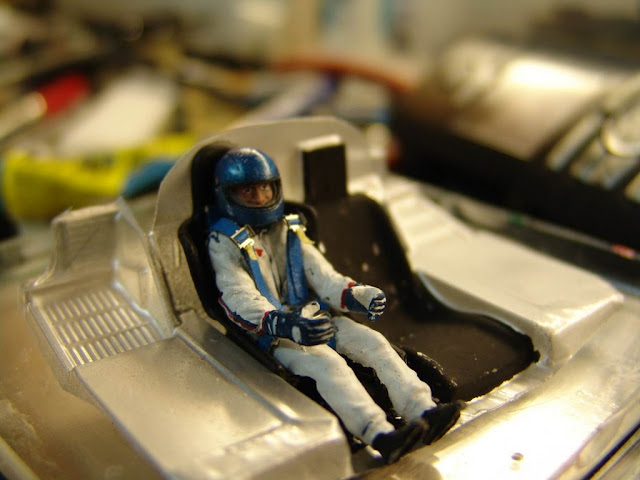 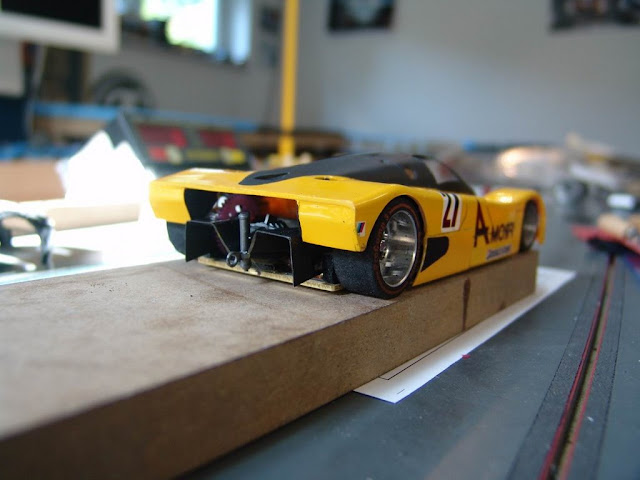 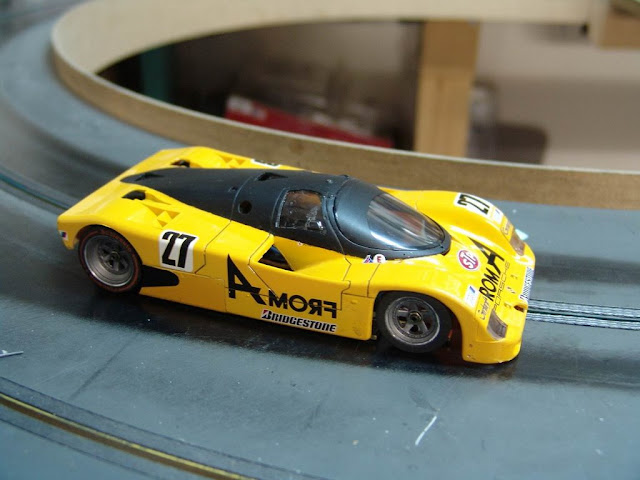 The car that was meant to be a Test car was looking like a concour winner! 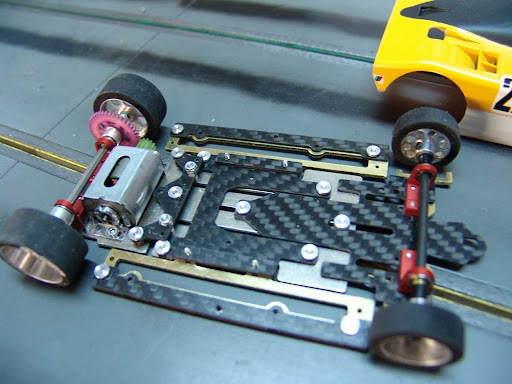 The Chassis.... Basis was the new Plafit 1700g, i added carbon body holders, h plate and T bar,
I made a fitting weight kit, added a Red fox guide that i modded for the Carrera track used my
copper tape instead of wires for the power transfer, T Hülsen where possible, Torx screws and
all possible goodies.

In Belgium in the Hotel and at the track I managed to finish the car.... add weight, build spoiler and
holders add the chip. 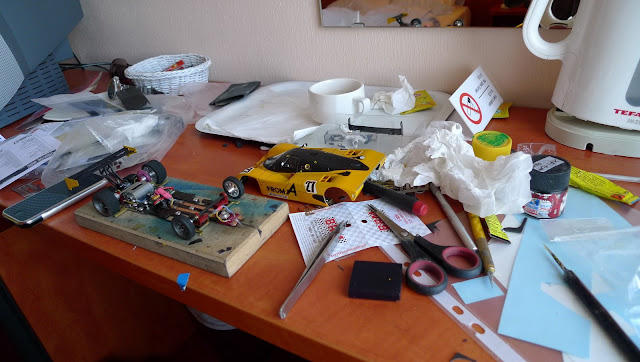 The "conversion" of the car was really easy - cut the motor cables, and plug the
Chip in between finished. Took 5 mins. 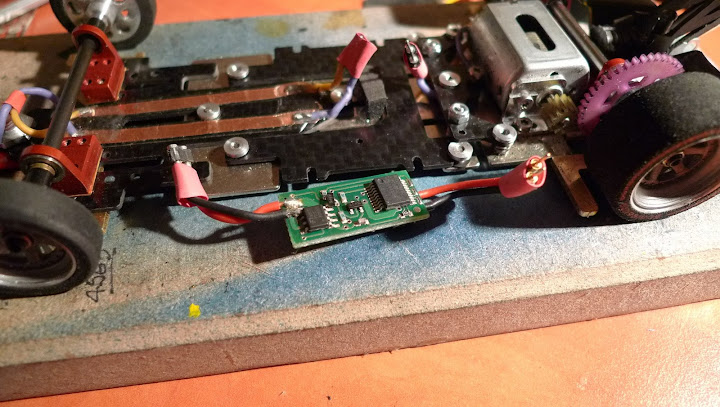 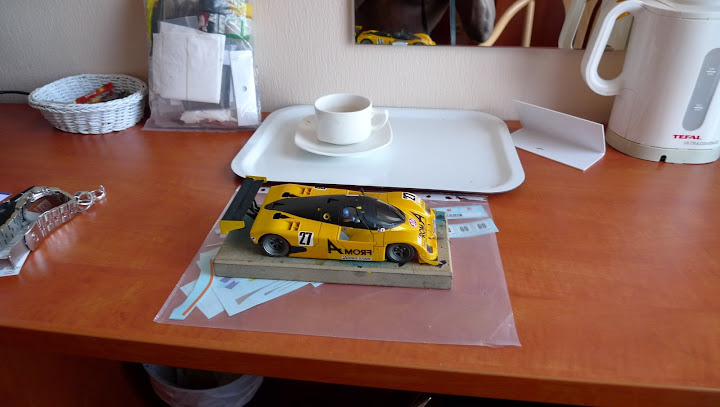 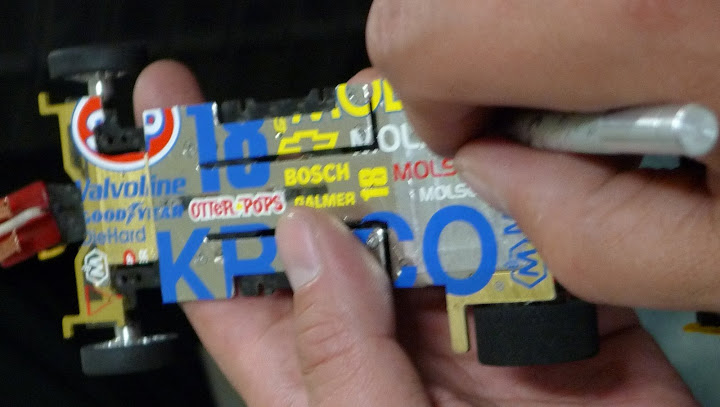 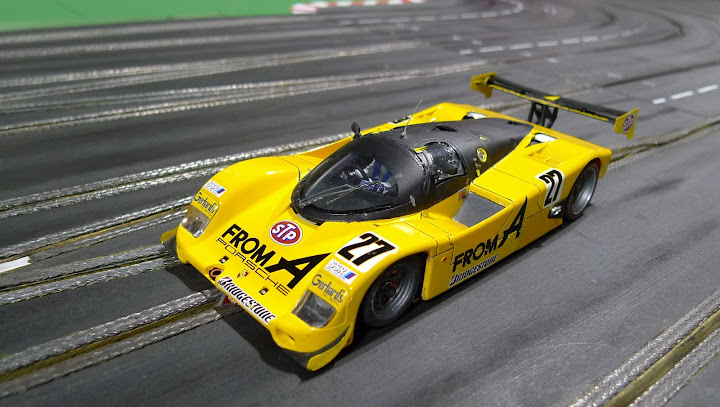 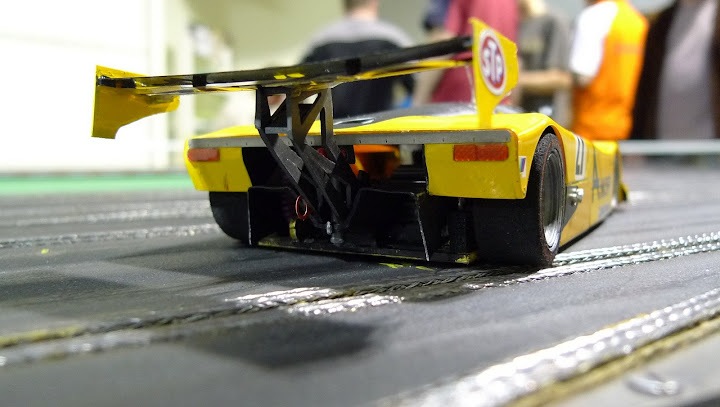 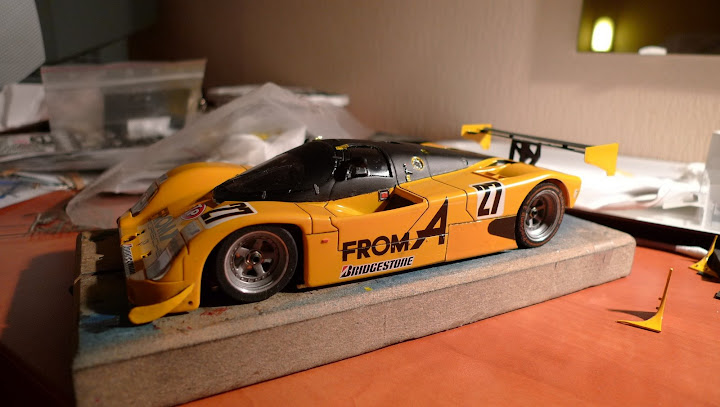 The controller is a different strory. You need a controller made for the system.
Willem built one for us that worked perfectly. Actually better than the one we had
borrowed for testing from Hubert the club owner.

The first tests runs with a standard BRM car lent to me by Hubert went well, I took the time to get
used to the layout, and then later started working on the lane changing.... that was not easy because
at certain points on the track you can only change one lane up or down....

Anyway the first tests went well, and I was just slightly slower than Hubert who was a favorite.
and around midnight we left the club so that i could finish the car in the Hotel.... was up till 4am ;-)

Finished 100% in time for the race, TC controll... the fronts were too small and i had to use super glue
to build them up. 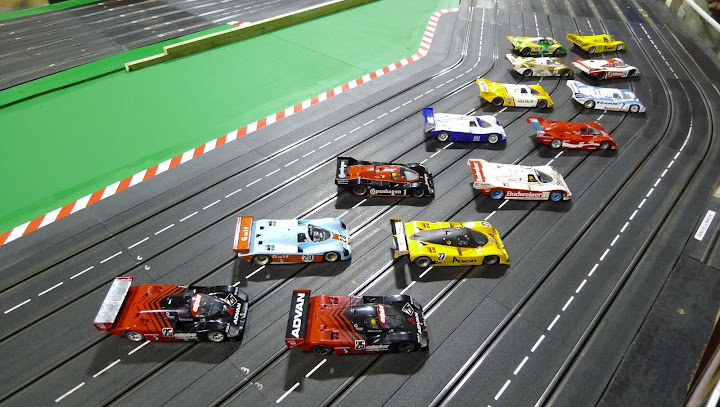 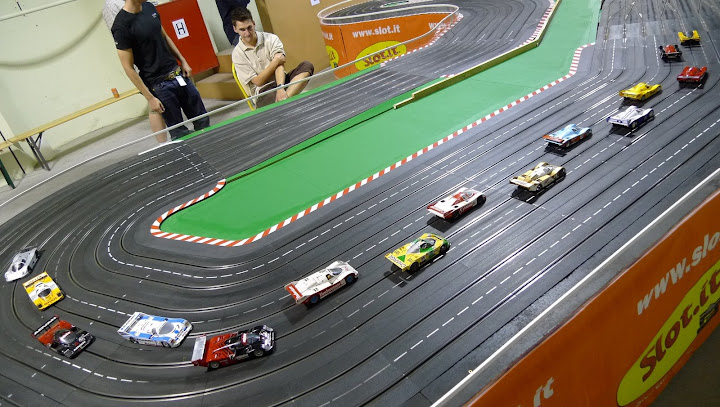 Quali.... wow, 15 cars on 6 lanes.... whos the fastest? RFH featuring Slotfabrik!!
Driving this way is just fantastic, you don't just race... you have to think an plan too... when to overtake,
which lane is the fastest ? which lane has less traffic? which lane ´has more or less grip?
where can I change lanes?[/SIZE] 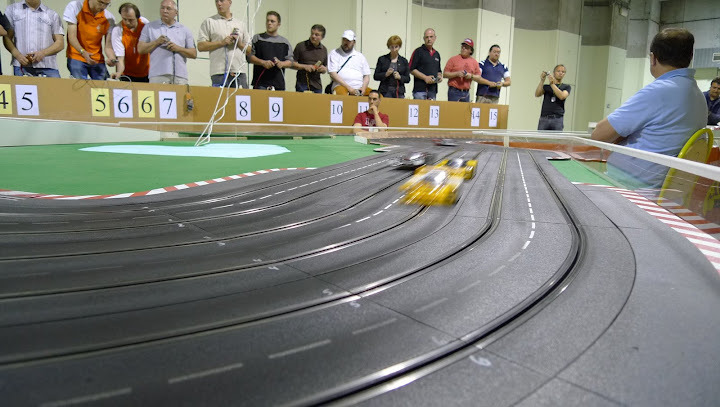 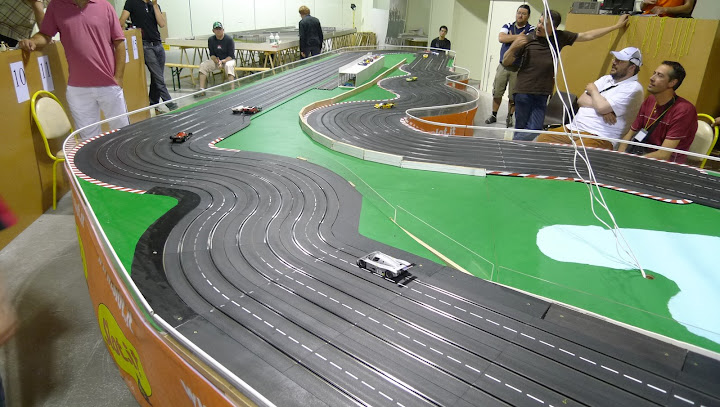 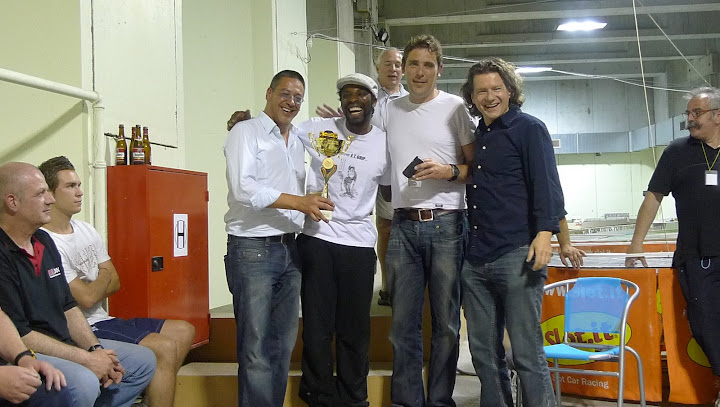 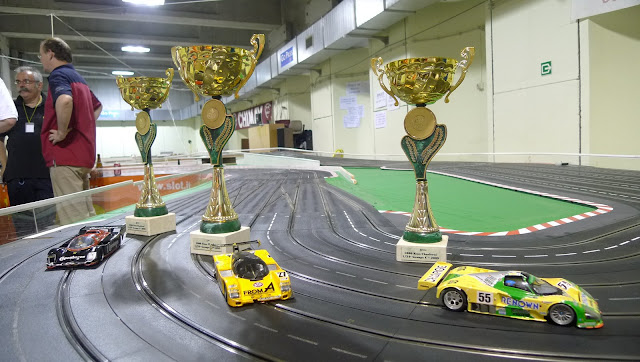 Lml in Hamburg was good eec rnd 5 in Alsdorf was great... but this was The best race ever!

Thanks Hubert,
Thanks Grek,
Thanks Tamar,
Thanks Willem,
Thanks Gabe.....

Awesome stuff guys. Thanks for the Pics Fola.. Car looks good as well.
I agree, I think a EORKING Digital system is the way to go. Did an article on the Forum 2 years ago already.. Time flies.. But a working system, like this, and maybe, hopefully, Slot It's OXIGENE will hopefully get more races like these up and running.
Awesome Suzuki track as well..

You guys are so lucky to have the chance to go to events like these all over Europe..
I need to find a job over there..